HOW TO NOT BREAK INTO THE MUSIC BUSINESS

In 1962 in Liverpool I was sitting in our living room with my father during the school holidays, and a local TV magazine show came on called "Scene at 6:30". Suddenly on the screen there were the Beatles doing their first-ever TV appearance. 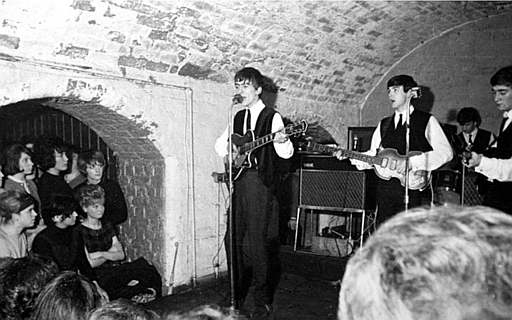 I was mesmerized as I'd never seen or heard anyone like them. I looked around at my father and saw the look of utter horror on his face, and right in that instant I knew without a doubt what I wanted to be.

A few years earlier my parents had sent me away to an all-boys public boarding school run by pedophilic sadist priests in the wilds of Lancashire (on the "Witch country" moors). In England, public schools are of course called "public schools" because they are in fact private schools.

I managed to avoid the pedophilia but not the sadism and I was the fairly frequent beneficiary of one or other of the priests' favorite means of making us more God-fearing - the ferula (whalebone covered in hard rubber used mostly on the hand) and the under-officer's baton made of black lacquered ebony, used mostly on the butt.

Sir Arthur Conan Doyle (the author of "Sherlock Holmes"), who attended my school from 1869, said of the ferula, "One blow of this instrument, delivered with intent, would cause the palm of the hand to swell up and change colour." It was not unusual to receive 6 or 12 such blows. 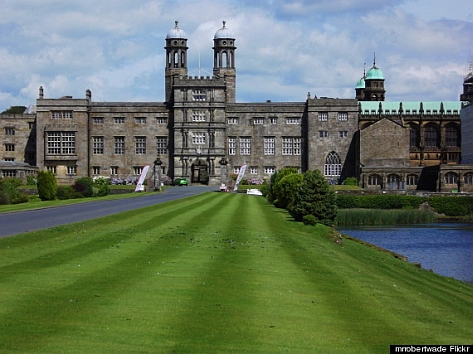 The priests were also skilled in other more sublime methods of torture - as an example, as we were going through puberty the priests told us that it was a mortal sin to "think about girls".

If one were in a competition to commit the best sin of all, one would of course go after the mortal sin. It is the Olympic Gold Medal of sins and wins one a guaranteed place in that most-cherished of Catholic holiday institutions, Hell. We were of course all doomed from that moment on.

In the midst of all this revelry, after seeing the Beatles and living with their 1st 2 UK albums I decided to form a band and we started practicing in a basement of the college. Our first gig outside the college was at the local lunatic asylum to a very appreciative, albeit very captive audience.

Our first show at the college was amazing with 600 young boys screaming at us as if we were indeed the Beatles. This so disturbed the priests that one was dispatched to grab hold of the microphone and order everyone to complete silence. This happened to occur right before the first song where I was the lead vocalist and so I got to nakedly sing the Beatles' "She's A Woman" to a roomful of deafening silence.

I can't imagine why to this day I have not sung another note in public, preferring to "sing" through my guitar.

Not long after, to my delight I was expelled for being a bad influence. My parent's delight did not seem to match mine and they arranged a meeting with the headmaster and to my mortification got me re-instated.

Halfway through my first term back I started to hatch my escape plan.

The college was separated from civilization by a 2 mile uphill driveway with long lakes and rugby fields on either side and a further mile or so walk into the local village, and I decided that I would make my escape shortly after midnight and try to make it to London which was about 200 miles South.

So, armed with two long bags full of schoolbooks contributed by friends to sell in London, I started out on the long trek up the driveway. Unfortunately my plan had failed to take into account the weight of said books while trying to walk up said driveway and half-way there I decided it would be more prudent to abandon the bags of books.

I finally arrived in the local village, which was at that time little more than a pub and a few random houses. I walked into the pub and the first thing I saw at the bar were the black backs of a line of priests!

Beating a hasty retreat, outside the pub I met a charming gentleman who claimed that he was a truck driver named "James Bond" and who was on his way to London and he agreed to take me with him. 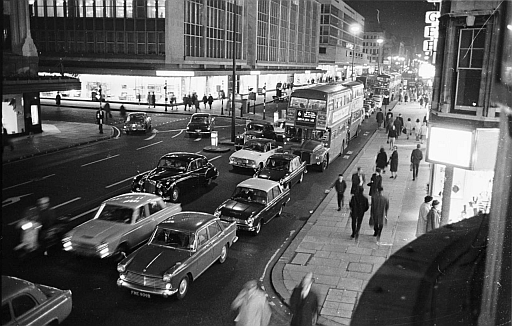 The next morning we arrived in London and he let me off on Oxford Street and I started on my new adventure in the largest city that at 17 years old I had ever seen.

I had had the foresight to bring with me the grand sum of one and sixpence - about 15 cents - and I had the choice of either eating or buying "Private Eye", my favorite irreverent satirical magazine, and of course I chose "Private Eye".

I remembered that I had heard somewhere that if you had nowhere to live you could go to a Police Station and stay overnight in a cell.

So I found Savile Row Police Station and requested lodgings for the night and was told, "You can't stay in a cell unless you commit a crime.". So I dutifully turned around on my way to the door to go commit my obligatory crime when suddenly a deep voice boomed out behind me, "Come 'ere!"

It seemed that the officer was not after all keen on the idea of my committing a crime and thus it was that I found myself at Camberwell Reception Center for Tramps and Vagrants. 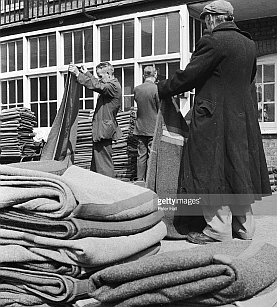 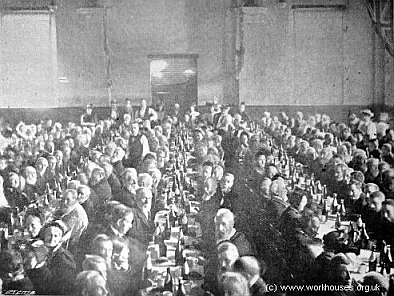 Camberwell Reception Center for Tramps and Vagrants was the charming establishment to where the denizens of the streets were rounded up each evening, and upon arrival stripped of all their clothes and given a freezing cold de-lousing shower with a hose, before indulging in the joy of sharing a huge room with about 80 other tramps and vagrants snoring on wooden boards.

Of course this was not too dissimilar to my life at boarding school so I felt relatively at home.

In the morning we were given a large mug of tea and a bowl of porridge. It was then explained to me that I had the choice of being put back on the street or working at the Reception Center for 50 pence a week.

At this point I began to suspect that perhaps this was not my ideal career choice.

THE TONGS AND THE FLEET 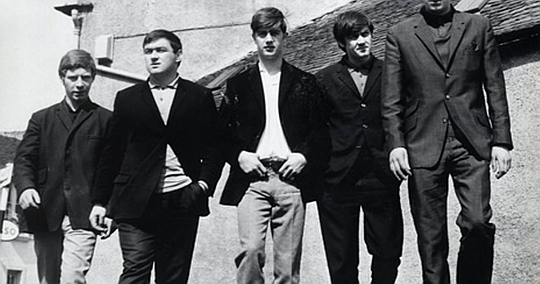 I decided to pull rank and requested a meeting with the warden. I made up a story about having come to London supposedly to meet my grandfather and his not showing up and the warden took pity on me and sent me to a hostel in Earl's Court where I soon learned that my roommates were members of the Tongs and the Fleet.

The Tongs and the Fleet were gangs from Glasgow, Scotland, and Belfast, Ireland. I immediately noticed that they were quite different from the youth that I was previously accustomed to at school and a major difference was that they were real - what they said was what they meant. None of the covert sly jabs that are the fodder of the British so-called "upper" class. These guys were refreshingly overt.

I learnt some interesting things from them, the main one being that when I was communicating one-to-one with pretty much any of them, they were relatively sane nice guys who I liked. But when they acted as a group, especially when alcohol was involved, they became an insane mob.

After a few months I formed a band with a couple of them and we found a manager who found us a gig in Beirut in the Lebanon.

OUR FOUR DAY FLIGHT TO BEIRUT

Our flight from London's Heathrow started out uneventfully enough but all that was about to change. What was supposed to be a five-hour flight took four days because storms in Beirut caused us to spend a night in Nicosia, Cyprus and then a night in both Varna and Sofia, Bulgaria.

The stories of our séance with Bulgarian air hostesses in Nicosia, and our adventures behind the iron curtain in Bulgaria where we were mistaken for the Rolling Stones will have to wait for another chapter, but I'll pick up this story the night we arrived at Beirut airport.

The Lebanese police immediately confiscated all our equipment and then nicely explained that we could rent it back from them merely by making weekly payments to them. 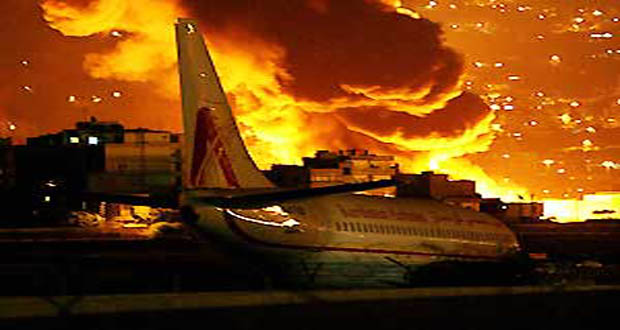 But that indignity paled by comparison with what happened next that night when the Israelis bombed the airport and destroyed nine planes. We scoured our employment contract, read all the fine print, but found nothing about being bombed by Israelis.

And so we found ourselves as a British rock and roll band dead-center in the Arab-Israeli war of 1967.

What happened over the next six months with our adventures as the only foreign band in the land would take a book in themselves but all I'll say here is that everything you've read about life in a rock band is true, and then some.

So six months later, when we had literally over-dined on every excess associated with the rock and roll lifestyle, we decided we were too full and we had to escape and to try and get back to London. Since the police had also confiscated our passports, this involved a midnight raid on the police station as well as bribing quite a number of airport officials, but we made it.

When we got back to London, our manager wanted us to cut a record so he booked us into a local studio. As soon as I walked into the control room I went, "Ahhhhh...." and I knew I was home. I felt like the proverbial kid in the candy store. 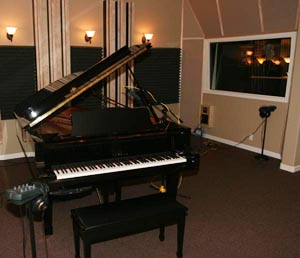 After the session I went over to the studio manager and said, "If I just hang around and watch - you don't have to speak to me or teach me anything - and if after a month I can do a session successfully, will you hire me?" He said, "You're nuts!" and I said, "Yeah, but will you?"

And so after a month of quietly watching I did my first session with "Sounds Incorporated" - the band who played the brass on the Beatles "Good Morning, Good Morning" - and it went well and thus I started my career as a recording engineer in London in the 60's and 70's where I was lucky enough to work with many wonderful artists, many of whom you are very familiar with.

And that would have been that except for something that happened a couple of months later.

Just for fun I picked up a bunch of instruments and non-instruments from around the studio and started making up and recording a song. One day a couple of very successful record producers walked into the studio while I was editing it and they asked me what it was and could they have a copy.

Two weeks later I had my first record deal as a record producer - and my first international hit record - and also the equivalent of about $4,000 in my pocket (this was 1968 when you could buy a week's worth of food for $4, so it was a lot of money back then).

And it was at this point when I finally realized what I really wanted to be and what I have since spent decades very happily doing.

What you think may be your purpose or goal may turn out to be something else entirely.

Don't be afraid to think outside the box or the norm of how "it's normally done".

Don't be afraid to ask for what you want.